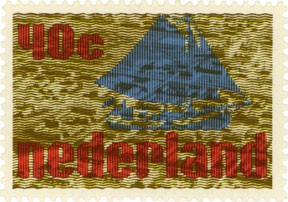 Jurriaan Schrofer (1926–1990) was a Dutch graphic designer. In the early 1960s he began his long association with the Dutch Post, Telephone and Telegraph Service (PTT). He later joined Total Design (now Total Identity), a leading design firm in The Netherlands. Although he worked on developing many lettering systems and alphabets, he never designed any commercially available typefaces. However, he did have proprietary dry-transfer sheets with his alphabets, so we're calling him a designer of types. To see some digital faces based on his work, click here.