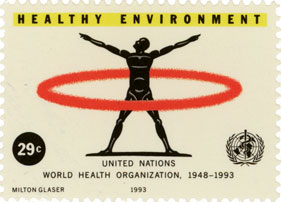 Milton Glaser (b. 1929) is a graphic designer best known for his "I Love New York" logo and the Bob Dylan poster included with Dylan's first greatest hits album. He was a co-founder of the influential Push Pin Studios in 1954. In 1974 he founded Milton Glaser, Inc. Glaser is an AIGA medalist and recipient of the National Medal of Arts. To learn more about his faces, click here.