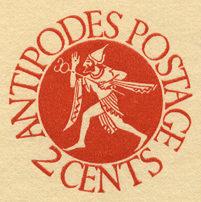 William Addison Dwiggins (1880–1956) was an American illustrator, typographer, and type designer. His 1928 book, Layout in Advertising, was a standard text on the subject for decades. A prolific designer of books for Alfred A. Knopf, he also designed five faces for Linotype, and earned honorary memberships in the Society of Printers and the Double Crown Club, as well as the AIGA medal. See more of his work here.

Dwiggins, W.A. Towards a Reform of the Paper Currency. New York: The Limited Editions Club, 1932.

“How to Lick a Stamp.” News-Letter of the American Institute of Graphic Arts, September 1943, no. 75.

“Stamps and the Man.” News-Letter of the American Institute of Graphic Arts, January 1943, no. 73.